‘He’d be thrilled with the whole thing’ 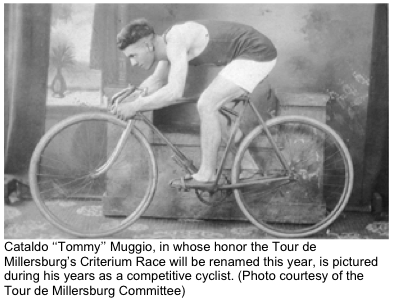 Former area resident Cataldo ‘Tommy Muggioi,’ a longtime cycling enthusiast, will be honored at this year’s event with the naming of the Criterum in his honor.

When the fifth-annual Tour de Millersburg is held this weekend, Cataldo “Tommy’’ Muggio will be there in spirit.

The late resident of Millersburg was a competitive bicyclist and advocate for biking as a healthy form of recreation, long before more recent cycling stars such as Greg LeMond and Lance Armstrong were born.

Muggio and his legacy now have a permanent tribute in the town he called home for much of his life. Tour de Millersburg organizers have re-named the Saturday Criterium race in his memory and he will be formally honored in the presence of his surviving family members prior to the start of this year’s race.

The ceremony will be held Aug. 13 at 11:45 a.m. at the race start/finish line at the intersection of Church and Herman streets in Millersburg.

While ‘‘Tommy’’ no doubt would be pleased with the honor, he would be even more pleased at what the Tour de Millersburg has become in less than half a decade: a much-anticipated event among competitive cyclists as well as Millersburg-area residents.

‘‘He’d be thrilled with the whole thing,’’ said Bill Baker, son of Sabelle Muggio Baker, one of Cataldo’s 10 children. ‘‘It was a dream for him to see something like (the Tour de Millersburg) get started in this area.’’

The surviving members have been excited about the honor ever since the race Committee proposed it last fall. As many family members as possible plan to attend the pre-race ceremony Aug. 13, Baker said.

A man who never stopped loving cycling. ‘‘Tommy’’ Muggio was born in Corato, Italy (near Naples) May 13, 1896 and emigrated the to the U.S. in 1911. He arrived in Millersburg in 1919 on furlough from the U.S. Army and met a local resident, Violet Dressler. They married and raised five sons and five daughters – Joseph, Kathryn, Sabelle, Lois, Janet, Thomas, Ralph, Florence, Larry, and Harold.

Muggio had become interested in cycling while still living in Italy and was heavily involved in cycling competitions for many years. He saw his greatest successes in the 1920s and 1930s, according to a biography on the Tour de Millersburg Website.

With an eye on qualifying for the 1928 Summer Olympics in Amsterdam, the Netherlands, Muggio placed second in the Maryland State Olympic Trials, then advanced to the Eastern Semi-Finals, where he did not make the cut.

‘‘Following his competitive days of cycling his energy was directed toward various political activities and he worked tirelessly to promote bicycling, particularly bikeways,’’ the Website biography added. ‘‘He believed fervently that cycling promoted strong bodies and good character especially among youth.

‘‘His efforts were instrumental in the establishment of a bikeway along Shippen Dam Road (outside Millersburg). The bikeway was recommended by then Pennsylvania Governor Raymond Shafer and of course was promoted by Cataldo Muggio,’’ the Website added.

Baker also recalled the bicycle races he would organize at a track located along present-day Wiconisco Street on the east end of Millersburg. Motorcycles also would race there.

‘‘He was definitely ahead of his time’’ in regard to local cycling, Baker said, although competitive cycl-ing was popular in other parts of the United States much earlier in the 20th century. (Races such as the Tour de France and others have been held in Europe since the very early 20th Century.)

A ‘‘fixture’’ on the Millersburg calendar. Held for the first time during Millersburg’s bicentennial observance in 2007, the Tour de Millersburg drew 70 racers that inaugural year. For 2011, around 300 entries are anticipated, according to Chris Dietz of the Race Committee.

Dietz – who felt the bicentennial observance should include a sporting event of some kind – had brought the germ of the idea to Shane March, owner of Chameleon Fitness at that time and an experienced competitive cyclist.

‘‘The partnership between Shane’s cycling knowledge and experience, and the community spirit surrounding the bicentennial fused into the foundation for the Tour de Millersburg,’’ Dietz said.

‘‘We have been blessed to have community support not only in the form of volunteers, but also with sponsorships from local philanthropists, foundations and businesses. Operating as a committee of Millersburg Area Working Together, we are able to receive tax deductible contributions to help offset the cost of producing the race,’’ Dietz said.

According to Dietz, the event has three goals: to have a ‘‘safe, quality race;’’ to bring the community together through volunteering or encouraging race participants; and sharing the profits from the event with local entities.

Since 2007, the event has raised $20,000 which was donated locally and brought in $50,000 in revenue from ‘‘direct or indirect spending”to the Millersburg area, according to Dietz.

Sarah Iepson, who raced last year, is quoted on the Website as follows.

‘‘I have made it to Millersburg for the last two years and this is, by far, one of my favorite weekends of the year,’’ she said. ‘‘The races are well organized, the courses are awesomely fun and hard, and the field is always strong… Thanks to the amazing city of Millersburg, your coordinator of host housing Julie, and your amazing staff of volunteers!! Thank you again for an excellent weekend. I am already looking forward to the 2011 race!’’